Does this genre make my butt look big?

What is it? Well, that's hard to say. It depends on who you talk to. There didn't use to be an argument. Chick Lit used to be any book which centered around a twenty something woman who liked high fashion, had man problems, had/wanted a glamorous job, liked to shop, had a gay best friend, was the 'girl about town' that we all wanted to be, or any combination there of. But that was back when everyone loved it. There was a huge surge of Chick-Lit in the 90's after the first ever Chick Lit novel took off which was Bridget Jones' Diary, but that has since died off. Lately, you have undoubtedly heard that 'Chick-Lit is dead'. No one wants to by it, or sell, it or read it, and if you label your work as Chick Lit you are dead in the water.

But my question is: How can that be, when publishers, authors, and the media continue to change the definition of what Chick-Lit actually is? Sophie Kinsella, Emily Giffin, Jennifer Crusie, Jodie Picoult, Sarah Strohmeyer, Meg Cabot, and Candace Bushnell all have been considered Chick-Lit at one time or another. Yes, they all write stories about 20-30 something women, but that's pretty much where the similarities end, yet they have all been considered Chick Lit. Most of them have even been asked about the label and how they feel about it. (Sophie Kinsella loves it--as she should being one of the queens of the genre, Emily Giffin is fine with it, Jodie Picoult was confused by it (as am I, in her case), and Jennifer Crusie didn't necessarily agree but also had no problem with it.)


A few days ago, author Polly Courtney actually left her publisher, an imprint of HarperCollins, because she was tired of them branding her books as Chick Lit when she feels they are women's fiction.
Yeah... left her publisher. That's big doins', folks. Was it that serious? She says yes.

So where does that leave people like me, who are actually writing in this genre? I've always considered my stuff Quirky Women's Fiction, but isn't that really just another way to say Chick Lit? I've never been ashamed of it, look, there it is right there at the top of my blog under my name. I've never though tit was a horrible thing, after all, that's not only what I write, it's also what I read. Am I dead in the water?

Here's how I see it: Women's Fiction and Chick Lit are very much like Paranormal and Fantasy. These days, there's a lot of gray area. Yes, both paranormal and fantasy have specific definitions, but sometimes it's hard to tell. Some books are absolutely Paranormal, while others are absolutely Fantasy. But look at The Sookie Stackhouse books (True Blood)--they are set in our world with vampires and shape shifters (Paranormal), but we also have Fairies, magic, and alternate universes (Fantasy) So which is it? Does it matter? No.

The moral of my very long winded, slightly ranty story: Don't let your genre define you; define your genre. In the end, if you have a great story, labels don't matter. If someone handed you a book and said, "It's a middle grade fantasy.", are you super excited? Probably not. Did you read Harry Potter? Probably. While reading it, did you care that it was a middle grade fantasy? Probably not.
Posted by Julianna Scott at Sunday, September 25, 2011 2 comments:

o
Hello all, hope everyone had a stupendous week. I just wanted to share a little gem I ran into this morning.

Jennifer Crusie is not only a fabulous author of romantic women's fiction, but on her website, she has one of the best 'For Writers' sections I have ever seen on a personal webpage. It is full of great info, no matter what stage of the writing process you are in--writing, finding an agent, finding and editor, selling, publishing, getting blurbs, reviews, press releases, and so much more!

Check it out at:

And be sure to check out Bet Me, her newest book!

Let me start this post by saying: I love my book. My agent and I have spent months reviewing, editing, polishing, and perfecting it, and it really is a thing of beauty--high heals, makeup, designer gown--the works.

However, I am not here to talk about the shiny beautiful manuscript, I am here to talk about her frumpy country cousin, otherwise know as my current work in progress. She's dirty and disheveled, with frizzy hair, chipped nail polish, mismatched shoes--and, dare I say it--needs to loose a few pounds. Basically a hot mess. If you put the two projects next to each other, you can tell they are related; voice, tone and style all being very similar, but that's about all they have in common. They would not be friends or even hang out together. Finished MS would probably steal WIP's boyfriend, throw punch on her hand-me-down dress, and leave her crying alone in the corner. And the worst part is, I would be right there next to Finished MS, laughing and pointing at the frumpy wall flower.

Why would I be joining Finished MS and not punishing her for her horrible behavior? Because, as much as I hate to admit it, I have as big a problem with WIP as she does. I just can't accept the fact that that sloppy mess actually came out of me. I have grown so accustomed to the beauty and shine of Finished MS, that I expect everything I write to be as polished right out of the gate. It's hard to remember that Finished MS used to be as buck-toothed and dumpy as WIP is now. It took me months to clean her up and teach her some manners, and even that wasn't enough. I had to take her to a professional beautician (who moonlights as a literary agent) to get her to where she is now. So naturally, I should know that there is no reason to be upset with WIP, as she just needs a little time.

I do know that. But that doesn't mean it isn't hard to remember.

So now if you'll excuse me, I have an Extreme Makeover: Manuscript Edition to get started on.
Posted by Julianna Scott at Sunday, September 18, 2011 2 comments:

Email ThisBlogThis!Share to TwitterShare to FacebookShare to Pinterest
Labels: Food For Thought, For a Laugh, Random Thoughts, Writing

I'll be back with a regular post tomorrow, but I wanted to show everyone what I've been up to this past week. (besides having wisdom tooth drama, that is...)

My husband's company has a "Time for Giving" event every year where they raise money for different charities. At the end of the event, they have a cake competition where people make cakes to represent each charity and they are judged. Last year, I made the cake for St. Jude's Children's Hospital and we won, so they asked me back again.

Here was our cake this year: 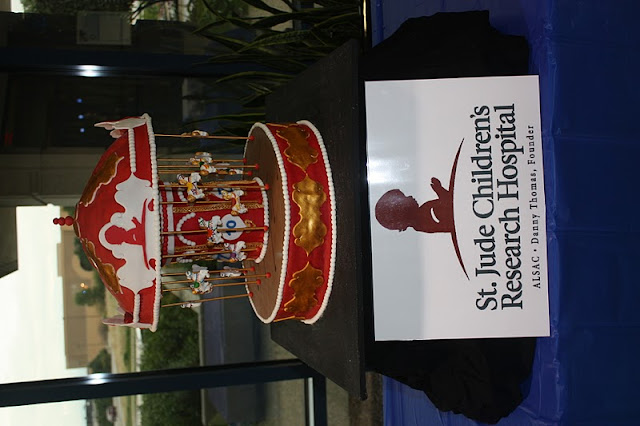 It took 32 long sugar filled hours, but we won! Yay!

Email ThisBlogThis!Share to TwitterShare to FacebookShare to Pinterest
Labels: Misc.

I had my wisdom teeth out a few days ago, and I've been having trouble with them.(Picture me lying on pillows with a gigantic retainer in my mouth.) This has left me confined to my bedroom with little to do besides look for entertainment online. I've done a little writing, but let's face it, the Vicodin--while it makes my writing interesting--doesn't lend it self to making any great strides in that department.

Basically I've spent my time watching TV shows via Netflix, and looking for videos on YouTube, which is how I happened across this little gem and thought I'd share...

I about lost it laughing, but then again, that could have been the pills.

Talk to y'all soon,

Posted by Julianna Scott at Sunday, September 11, 2011 No comments:

Email ThisBlogThis!Share to TwitterShare to FacebookShare to Pinterest
Labels: For a Laugh

We've all got them--the words we use in our writing over and over and over again. I've always known I have them, but it wasn't until this last long weekend of editing that I realized just how much I use them. Here, I'll give you my list as an example:

However
So
Anyway
Yeah
Alright--(which isn't even considered a word, so not only do I have to
delete a ton of them, but then I have to change the ones I
keep to 'all right')
Actually
Muster--(I don't know why, but this is my go-to word for 'gather' or
'collect', etc.)

My agent will probably read this and add a dozen or so more to the list, but I'm pretty sure these ones are the worst.

Why have I taken a bigger notice of my buzzwords, you ask? It's because this is the first project where I have deliberately left them in--the first draft, that is. A few weeks ago, while working on the first draft of my new ms, I came to realize that I was spending more time worrying about word choice than I was spending actually writing. This wasn't a problem with my first few books because I wasn't totally conscious of it. However,(ha, see there it is!) now that I am aware of it, I'm obsessing about it. Every single time I type the word 'anyway' I want to change it immediately, instead of simply moving on. As a result, it was taking me days to write chapters that should have taken me hours.

Well, I am happy to announce that I have put an end to it. I have officially adopted idea that it is okay for your first draft to suck. Deep down I have always known that this is the case, but this is the first time I have forced my self to be okay with it. After all, no matter how 'perfect' I think I get that certain line or paragraph, when I go back and read it the next day, it still sucks, so why waste the time initially when I will have to go back to it again anyway?

Well, I can happily tell you that I no longer edit while writing first drafts. Not ever. Or at least not usually. Okay, maybe once in a while. Every now and again, but only when I forget... or when a sentence is really bad...

Alright, so it's kind of a hard habit to break, but I am much better, and that is a start. Ernest Hemingway once said, "The first draft of anything is shit.", and if that was good enough for him, it's certainly good enough for me.

How about you all, Buzzwords? Let's hear them!
Posted by Julianna Scott at Wednesday, September 07, 2011 5 comments: